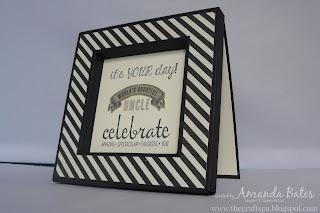 So it is Fancy Fold Friday again...so here is another idea and another tutorial for a different Box Frame card...

This card is a birthday card for a favourite "uncle" of mine - known him since the day I was born!! A very special man in & throughout my life... thought it was about time I told him that!

Having die-cut the Scallop Square aperture for yesterday's version of the card... I thought that it was maybe a bit too "frilly" for a man's card...but I liked using a Square Framelit to cut out the aperture in the paper rather than using strips as per the original card I made.... 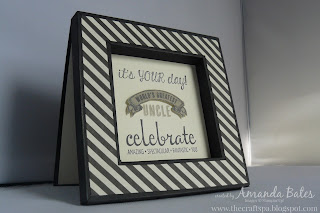 But the largest Square Framelit aperture is too small for the large 6" square versions of the Box Frame Card I have been making - another one here...

So a re-size was in order - so this is a 5 1/2 Square card instead - so I am calling this the Medium Square Box Frame card... although it isn't that much smaller really.... 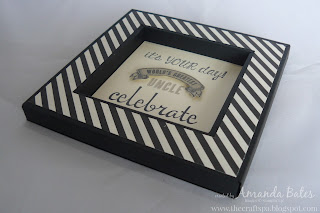 But before I share the tutorial – these details should be read in conjunction with my Shadow Box original tutorial which has  pictures of each step for you.

In fact I strongly recommend that you make up one of the shadow boxes as per my original tutorial first… call it a practice run! The adhering of the sides (steps 6&7)  is harder in this version – so it is better that you know what to do before you do it!!!

And I have to admit that I use Tombow on the straight sides – as having a bit of wiggle time is very useful with this one! Still use Sticky Strip on those diagonals though…..

2. Score extra score-lines from edge to 2nd score line at 4” and 7 1/2" on 2 opposing sides
3. Cut up these extra score lines & diagonally across to the 3rd score-line intersection
4. Cut off  “16-square” section at each corner

12. Die cut aperture in paper using largest Square Framelit ( TIP - I eyeball it! - but if you are uncomfortable with that - draw the diagonals in with pencil/Frixion pen on the back of the paper - then eyeballing/getting the die central is much easier!!)

13. Adhere paper to front of frame

14. Decorate as necessary.
Note - I just daubed the Sahara Sand ink on the Worlds Greatest banner - saved me going upstairs for some Sahara Sand cardstock!